Goal: South of the Sahara, Inclusive Religious Education (IRE) is an exemplification of an attempt to decolonise Religious Education (RE) (see Gearon et al., 2021). To a greater extent, such a format of RE is a response to the emergence of a democratic dispensation (from the mid-1990s onwards), including greater recognition of cultural and religious plurality in line with the protection of rights and other freedoms crafted into national constitutions. IRE is part of a broader discussion on how education must respond to United Nation’s Sustainable Goals related to reducing inequality in whatever forms it exists (Goal 10), and in particular how the school curriculum deals with religious minorities in national contexts with a historically majoritised religion. Addressing these issues through education as ‘safe space’ is important towards realising The Organisation of African Unity’s Agenda 2063, which, inter alia, prioritises inclusive social development, strengthening democratic governance, and ensuring peace and security in repositioning Africa as a global player.

What makes IRE different from the missionary-type Christian RE is the importance it places on religious plurality as the core issue in doing RE, including controversially, the phenomenological imperative that ‘truth’ resides in every religion. However, to date how countries south of the Sahara have engaged with IRE from conception to policy and then implementation at school, is a subject that has not been subjected to critical reflection. What little is known indicates a programme of RE (i.e. IRE) that is contested and slipping into obscurity as countries seem reluctant or unable to embrace religious pluralism as part of doing RE, a school subject that traditionally has focused on normative religions like Christianity or Islam (Matemba and Addai-Mununkum, 2021). Evidently, IRE south of the Sahara is in crisis and therefore in need of redemption if RE at school is to align with democratic principles in recognising the religious ‘other’ as premised in the countries’ national constitutions.

The joint conference organised by colleagues from three institutions (University of Malawi, Malawi, University of the West of Scotland, UK, and Domasi College of Education, Malawi) invites academics, scholars, researchers and other interested stakeholders (e.g. education officials, religious groups, non-governmental organisations and political leaders) to a critical discussion on the state (public esteem), status (extent of provision) and future direction for IRE in a democratic dispensation south of the Sahara. The following questions are instructive in thinking about the conference: 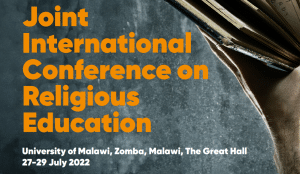 Call for Proposals: 2022 Symposium on Education in Muslim Societies

Listening to the Buddhists in Our Backyard: Reflections on Buddhism(s) in the Merrimack Valley

Call for papers for a special issue of IJED